(For background, check out Part One and Part Two.)

In a same-sex relationship, there’s not an option of falling back on traditional gender roles.  Who cooks and who does the dishes?  Who does the laundry and who mows the lawn?  And more to the point (you see where I’m going with this), who proposes?

As you know, in mid-June, Liz surprised me by proposing (and I said yes).  Then, a few weeks ago, on a sunny Saturday in Napa, I proposed back to her.  (Spoiler alert:  She said yes too.)

The idea to propose crystallized in the midst of my post-engagement glow.  As I chatted with a friend over lunch, she shared how she and her wife always knew they would both propose, one-to-the-other.  Their choice was not who would propose, but instead who would go first.

I loved the mutuality of this.  When Liz proposed, I was already noodling on the idea of proposing to her in the fall; in fact, I felt a little scooped when she asked me.  (I felt 99% excitement and 1% mild annoyance at being beat to the punch by my clever, clever fiancée.)  Happily, this mutual proposal idea meant that I could ask right back.  We could both be the one summoning the courage to extend the question and the one thoughtfully answering.  (Though perhaps with a higher degree confidence this second time around.)

My planning began with the object of the proposal.  While Liz nailed my preferences by guessing I would want a traditional ring, I hadn’t seen Liz be too enthusiastic about one.  Every time I pushed or prodded on the ring idea, there wasn’t a clear answer.  Separate from the ring, however, I had heard Liz talk about wanting a pocket watch for a very long time.  So I took off to a fine San Franciscan haberdashery (yes, Virginia, there is a haberdashery) and secured a beautiful 1902 Waltham pocket watch with an engraving of a trolley car on the back.

Next stop was the engraver.  Like Liz before me, I suffered upturned noses, exorbitant prices, and long lead times at every Union Square jeweler before returning to the sweet little shop where Liz had my engagement ring designed.  They engraved a lovely message on the inside of the watch and tuned it right up.  When returning the finished product, the engraver even volunteered that this watch was very lucky indeed, citing the fact that the serial number (238) was the number of years from the country’s founding to today (2014 minus 1776).  Now I wouldn’t have thought of or celebrated that myself, but given Liz’s patriotic history, it seemed like a good omen.

After getting the go-ahead from every member of Liz’s family, I pulled together the detailed plan:  Liz’s best friend from graduate school generously gave us wine tastings and engagement photos in wine country as our engagement gift; I would now enlist her as my accomplice.  She agreed to arrange us for pictures such that I would sit near Liz’s feet and she would stand behind so it would be easy to switch into the traditional proposal posture.  We schemed that we would start our day at a champagne house where we could toast the proposal after Liz accepted <fingers crossed>.  I even assigned key words to coordinate in the moment; “That looks like a place for pretty pictures” was code for “We should probably do the proposal over there” while “I need to reapply my lipstick” was code for “This is happening.  I’m going to get my purse with the pocket watch inside.”

When I finally turned to ask, I don’t much remember what came out of my mouth.  You think I would have been a bit more stable considering my odds on the answer, but, in Liz’s words, I “shook like a little leaf.”  By the time I popped open the pocket watch and hazily got through my lines, however, Liz said yes.  Then champagne.  And crying.  And more crying. 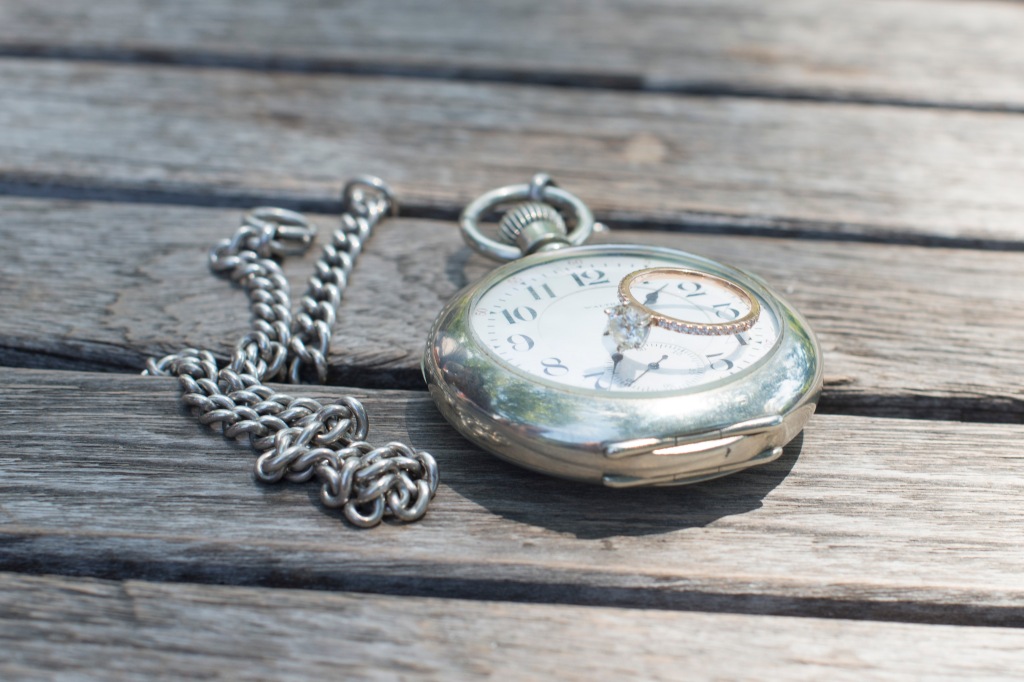 There was something really special about asking Liz to marry me.  I got to engineer a memorable, romantic moment for Liz, the Champion of the World at engineering of memorable, romantic moments.  She got to be surprised, a rarity for that observant lady.  And together we reaffirmed the mutuality of our relationship, wherein both of us can take the lead and both of can be wooed.

Interestingly, in the wake of both of our proposals, I heard all sorts of stories of other couples – both same-sex and heterosexual – being similarly intentional about their proposals.  A female colleague proposed to her long-time boyfriend, citing that he had always been more ready to get hitched and she wanted to give a clear sign that she was ready too.  A male friend initially rejected the idea of proposing (with its associated plotting and secret-keeping), but got on board when his girlfriend valued the traditional approach.

In our relationship, the answer to “who does what” has had to be intentional – and will continue to be so.  I am grateful every day that we consciously choose the path that works best for us, beginning with our two unexpected proposals.

This site uses Akismet to reduce spam. Learn how your comment data is processed.

Like what you’re reading? Get the the book here:

My posts may contain affiliate links.  If you buy something through one of those links, you won’t pay anything extra, but I’ll get a small commission which will be reinvested in content creation.  This is made possible through participation in the Amazon Services LLC Associates Program, an affiliate advertising program.  Thank you for your support!

Recent posts on The Intentional

Topics on The Intentional

Get my first book, Indispensable, here: